Sustainability is the study of how natural systems function, remain diverse and produce everything it needs for the ecology to stay in balance (EPA, 2013). There are many examples during human history where civilization has destroyed its environment and dangerously affected its survival chances -some of which Jared Diamond explores in his book Collapse: How Complex Societies Choose to Fail or Survive.

The projects deals with waste & pollution and the opportunity to reduce it. By re-educating people to act mindfully towards the environment and lower usage of single-use products by offering affordable & sustainable products at peoples convenience with the help of mobile App and e-shop.

In the National Assembly in Paris, Greta Thunberg mentioned a summary of recent studies which prove that around the year 2030, we will likely be in a position where we may pass a chance to revert the changes made to environment (Thunberg, 2019).

The mission of this project was to design an interface that facilitates personal and social behavior change. The problem of climate change is critical, and we  need solution to effective change of human behaviors.

Create an app which will hook the user effectively enough to keep the sustainability habits going as long as possible. Based on conducted research majority of people form habits hardly and avoid living more sustainable out of convenience.

Is there a way to change this ?

The goal is to create an App that will motivate team members and individuals to act more aware of their environment by completing challenges aimed at sustainability. The App should be supported by gamification elements to make it fun.

Qualitative methods, such as interviews and usability testing were used in beginning of research as it provides in-depth understanding of user experiences, motivations, and everyday lives.

The data collected by quantitative methods such as surveys and formal experiments were used to measure aspects of users and user behavior. The aim was to obtain objective analyses that are unbiased by the researcher’s hypothesis, presence, and personality.

The questions for studies were carefully selected to receive useful data concerning the research questions. Collected data were later on turned into graphs and statistics for a better understanding of the audience.

“I feel like I have not given it a proper thought before.. but maybe I should recycle more (Evaluation survey, 2019)”

What is stopping people from living more sustainable? 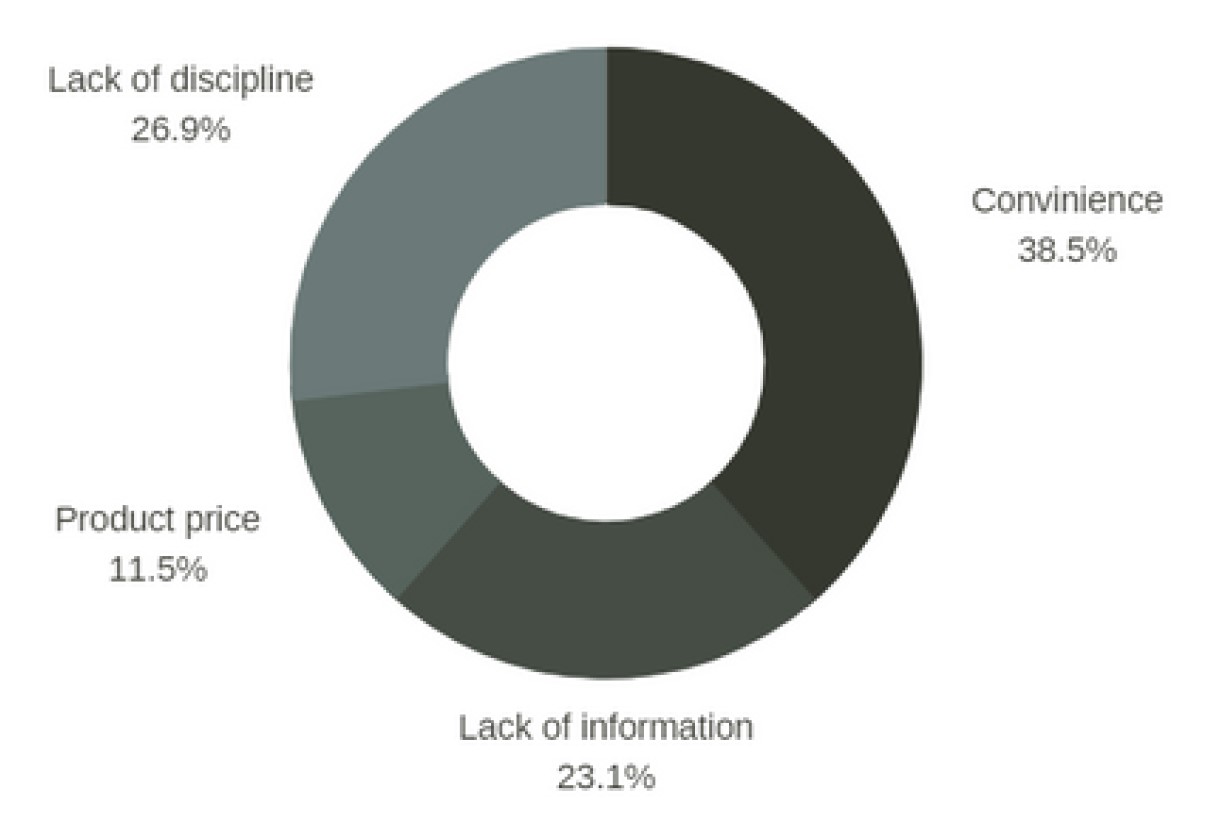 Fifteen people attended user survey with an emphasis on the habit-changing. The age range was in between 18 to 44 years – both male and female mostly living in Australia. The responses show that the majority of people (eleven out of fifteen) use in between three to ten mobile applications daily. Eight people admitted that they form habits hardly and nine people (which is 60%) would welcome coach app to guide them.

The primary goal of this interview was to find out if people would be keen to use the habit changing App with a focus on the environment. When attendees were asked how serious is the current environmental situation for them, 86% answered very important to extremely important. The survey revealed that 70% of attendees would like to change their habits to improve the current environmental situation.

People do not pursue sustainable life-style out of convinience

Said that they would like to improve their sustainable habits

The App follows a hook model which describes an experience designed to connect the user’s problem to a solution frequently enough to form a habit (Eyal & Hoover, 2014). This model consists of four steps trigger, action, variable reward and investment. If the App is developed correctly, this cycle will repeat and create a hook(habit).

Internal - tightly coupled with a thought, an emotion. For ex. will to change habits in regards sustainable lifestyle

The competitor analysis served as a stepping stone for all major features of the App as well as it revealed possible opportunities for improvement of user experience. 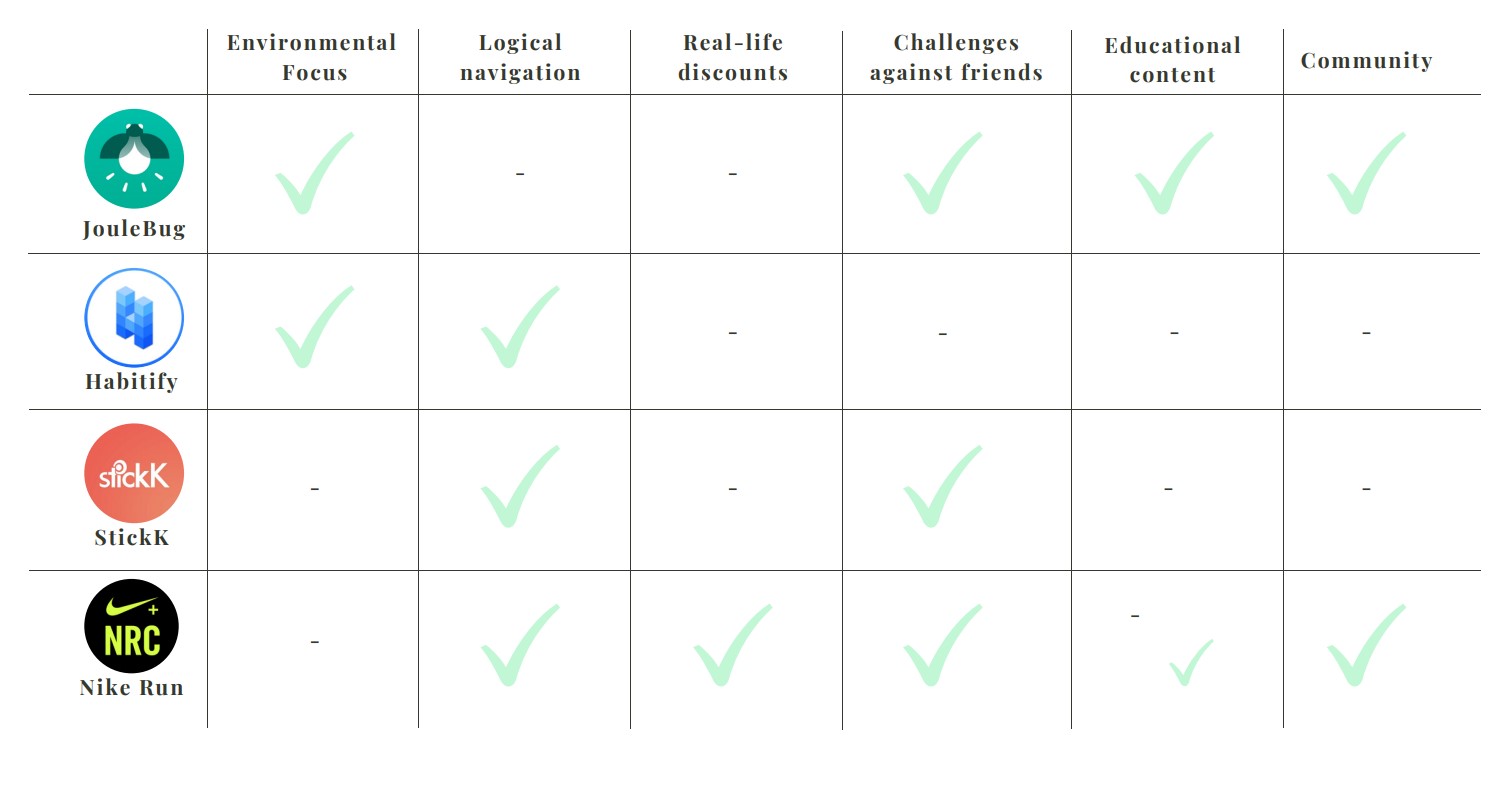 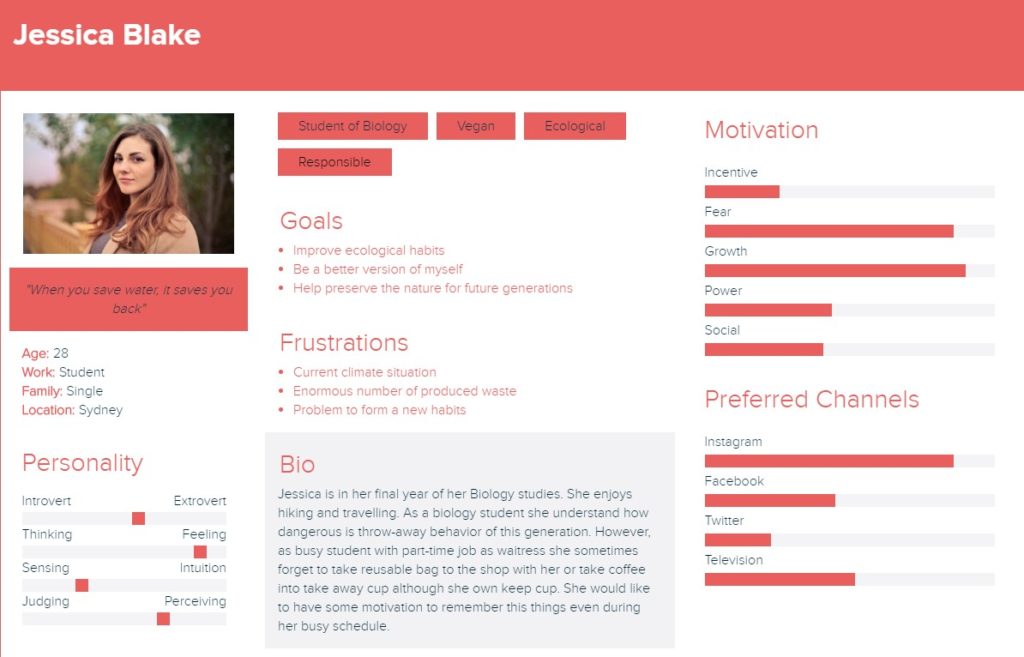 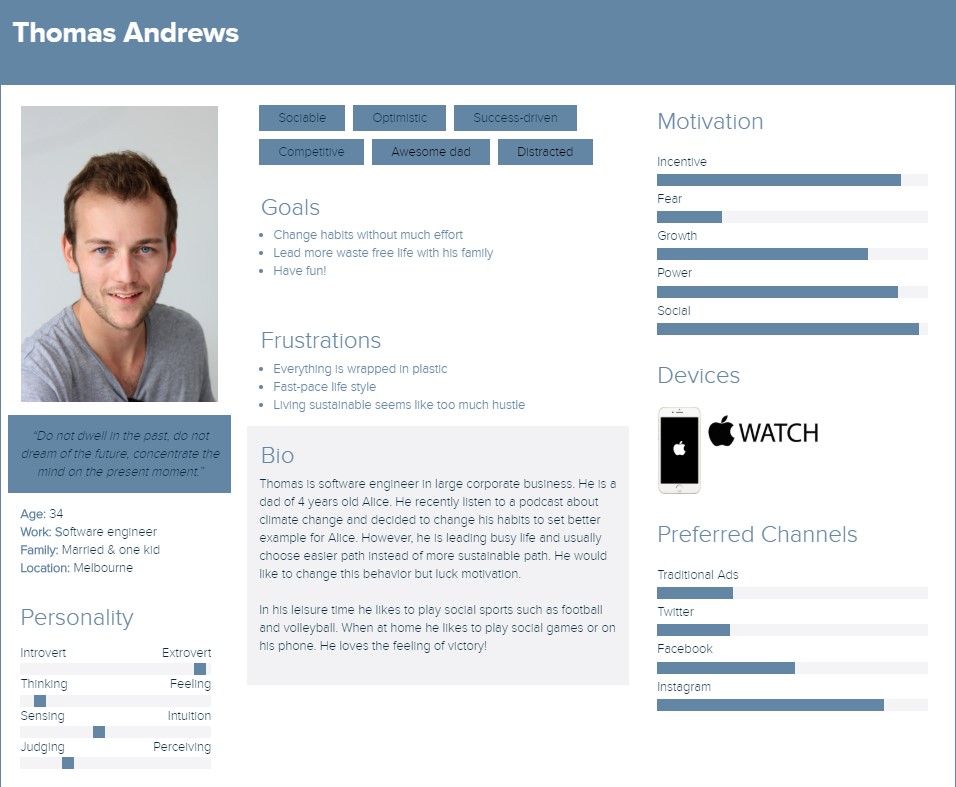 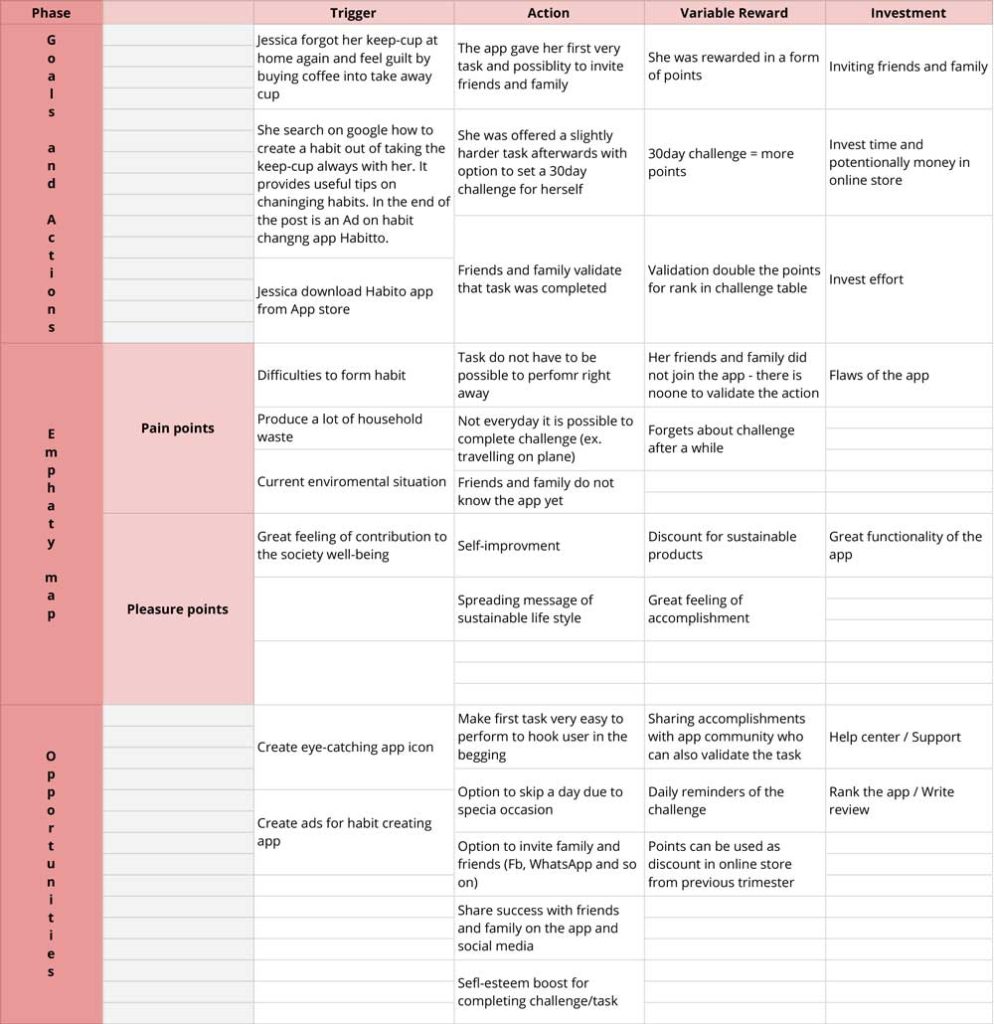 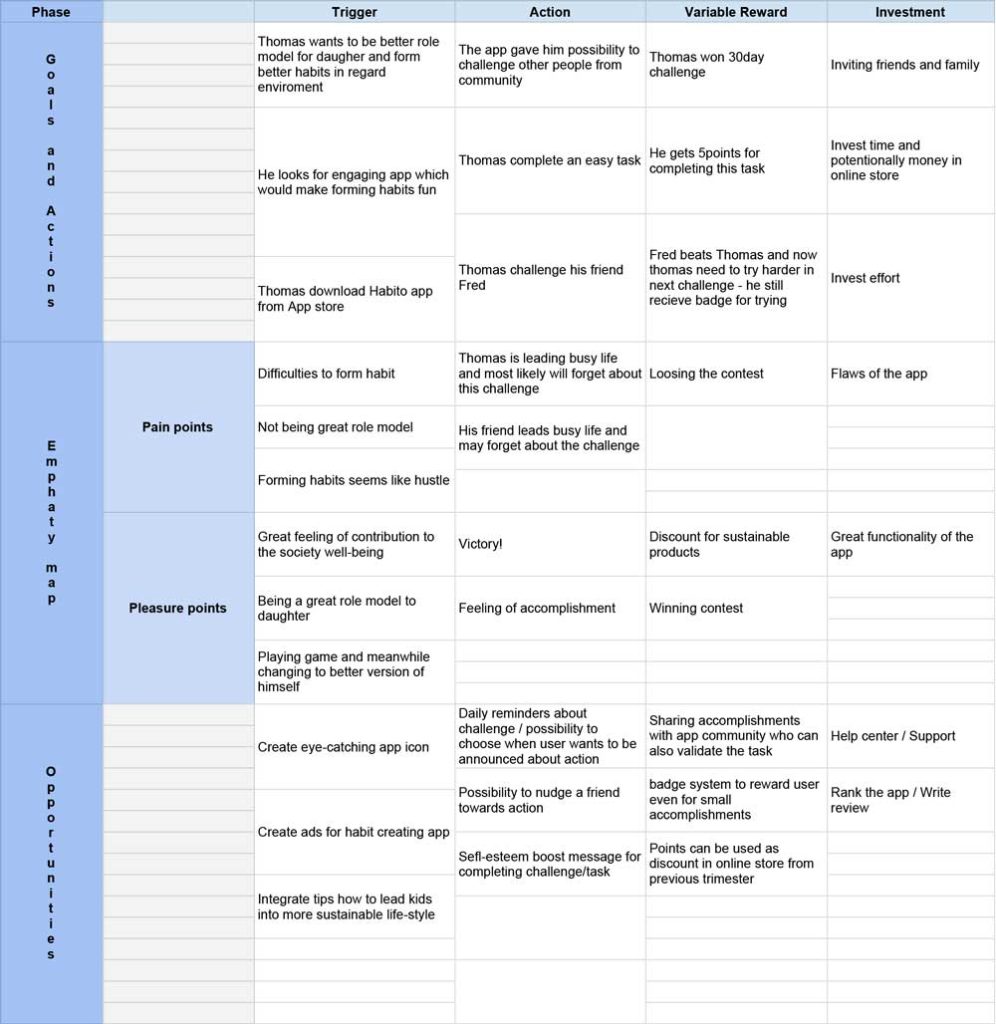 Low fidelity usability testing has been made via mobile sheet prototyping with five attendees in between 20-40 years. Mobile prototyping is essential to get user experience on point. This stage provided feedback on three aspects: page flow, user interface interaction and device interaction.

The outcome of testing pointed out navigational flaws such as button notifications was not clear enough for three users out of five.

“It would be better if you rename this to activity or statistics” (Anonym,2019).

When users were asked to create a new challenge, there was a lot of confusion and just 2 out of 5 participants clicked on the plus button in the middle of the navigation panel. The feed button was not apparent to the users, and they suggested to rename it to community feed instead. Meanwhile, on the profile screen, the setting button is not visible enough and will require word labeling.

The flaws discovered during this phase were edited and process moved into next stage – hi-fi prototyping. 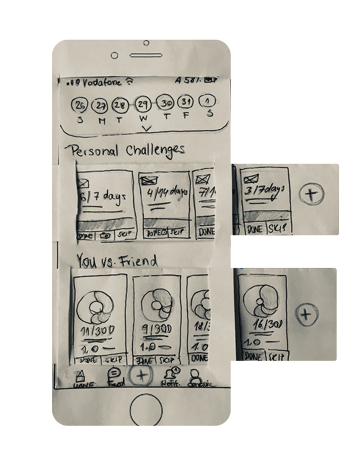 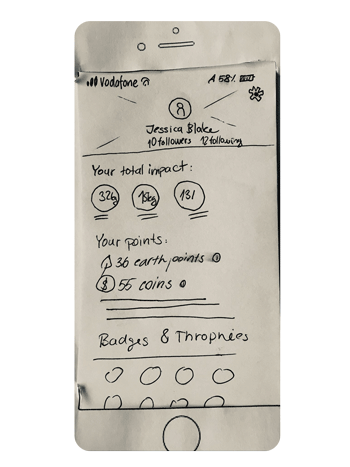 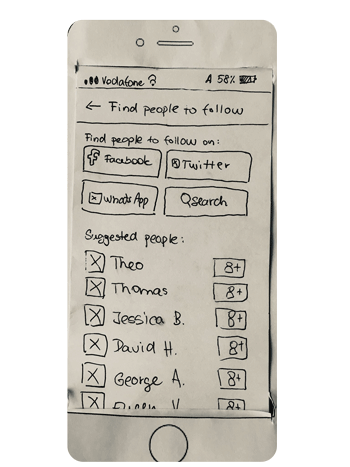 A moderated testing session was administered in person. The test was introduced to participants, and their queries were answered. To gain even more profound knowledge, the followup questions were asked. Moderated testing provide in-depth results thanks to the direct interaction between researchers and test participants.

The method First-click was used during this phase of the project. It was chosen
to evaluate if users can quickly identify where they need to navigate to complete a given task. The participants were asked a question like “Where would you log your daily activity?” and the researcher job is to record where they direct their mouse (where they tap).

The results of the testing uncovered several usability issues which need to be addressed. For example, the majority of test attendees were confused about where should they click to obtain more information about the challenge & and where they should log their daily good deeds. Therefore a log activity button was split into two buttons – start and read more. 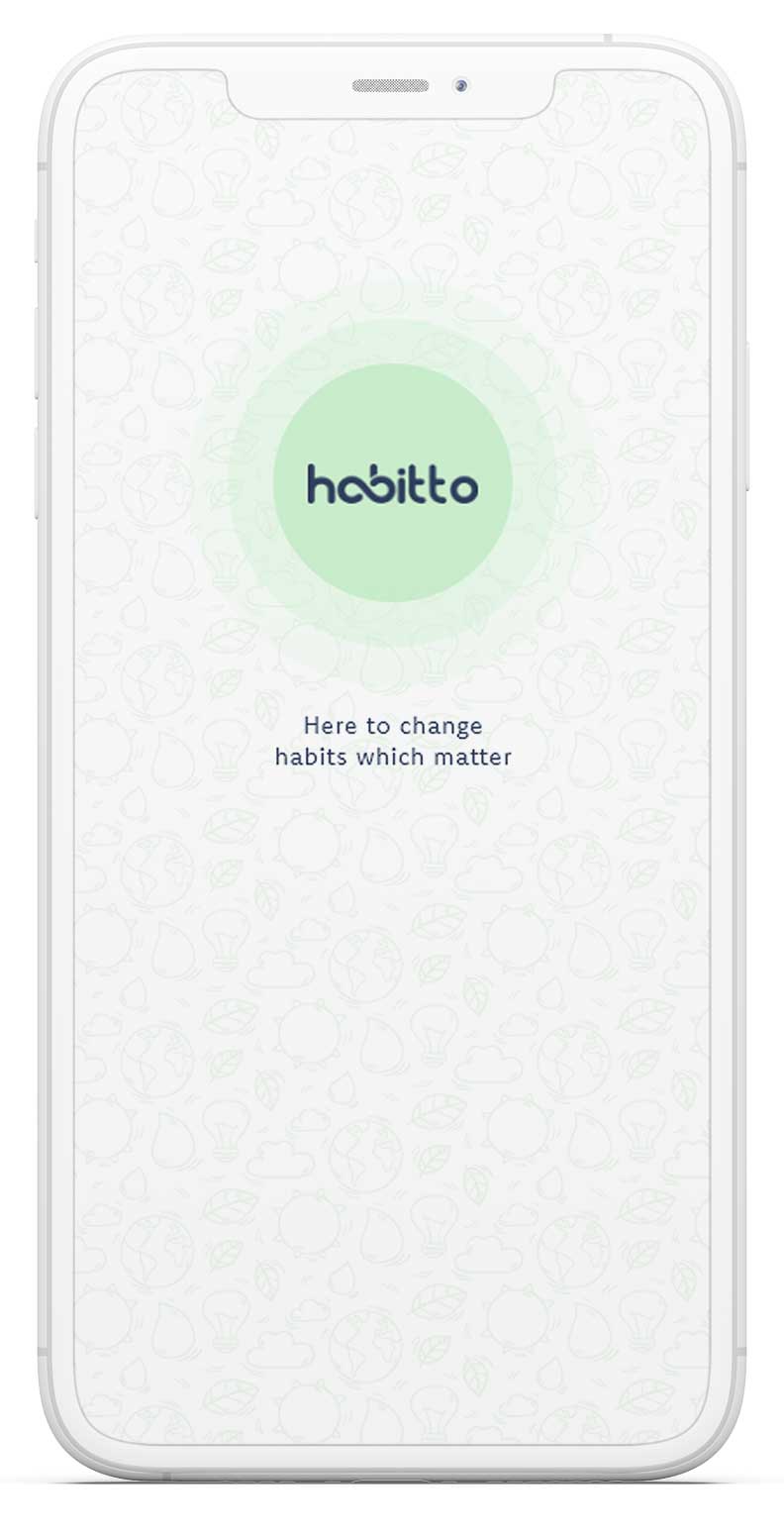 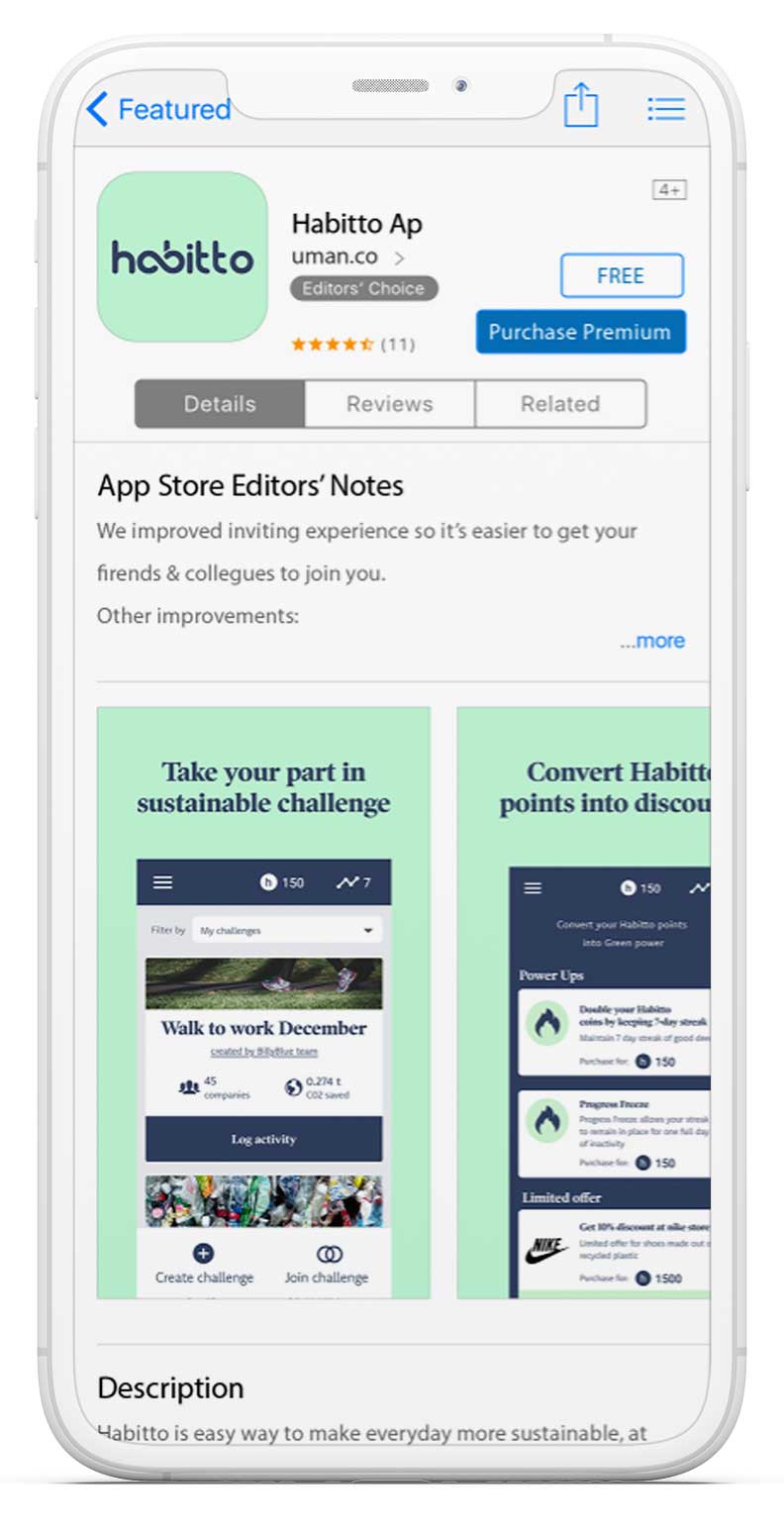 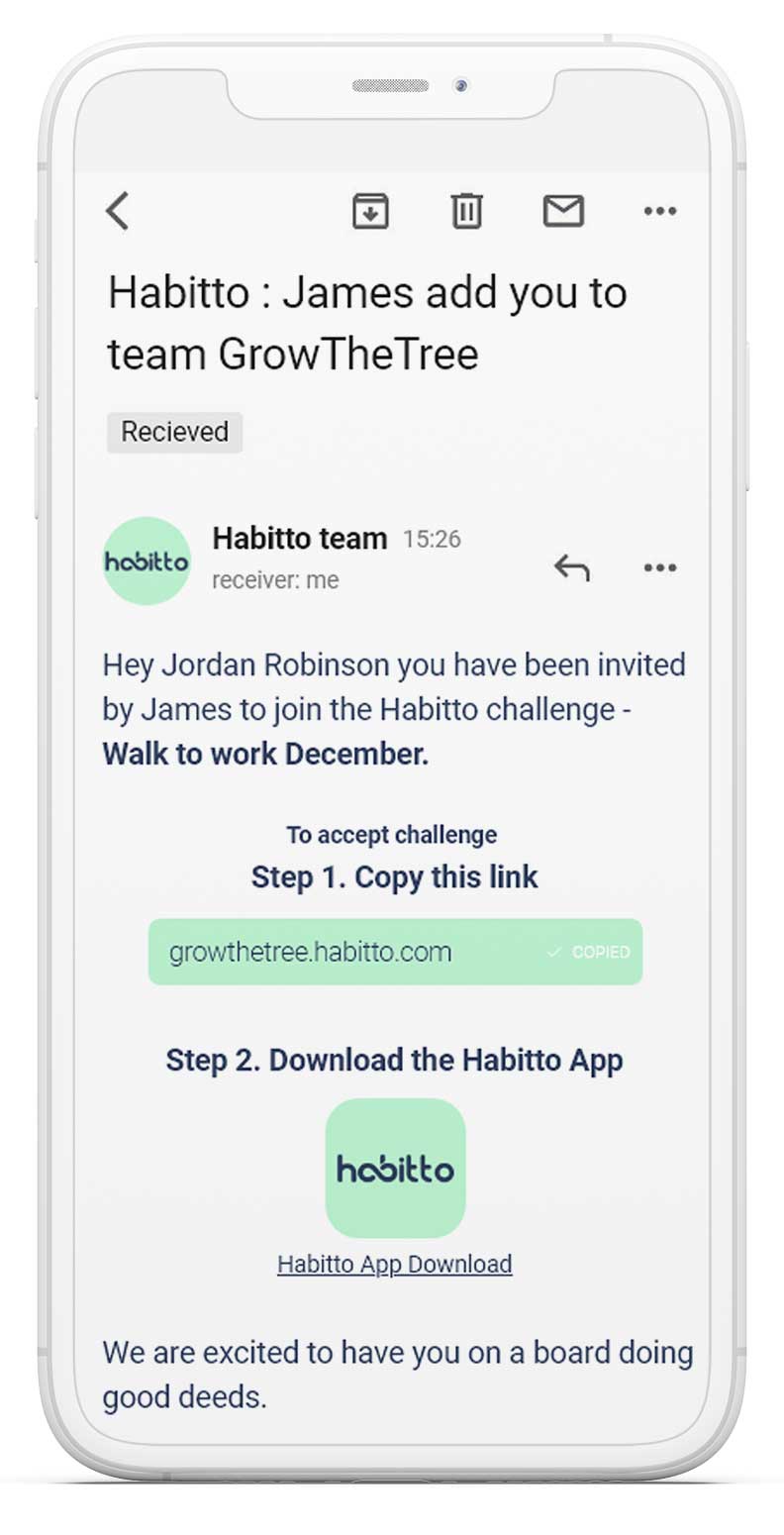 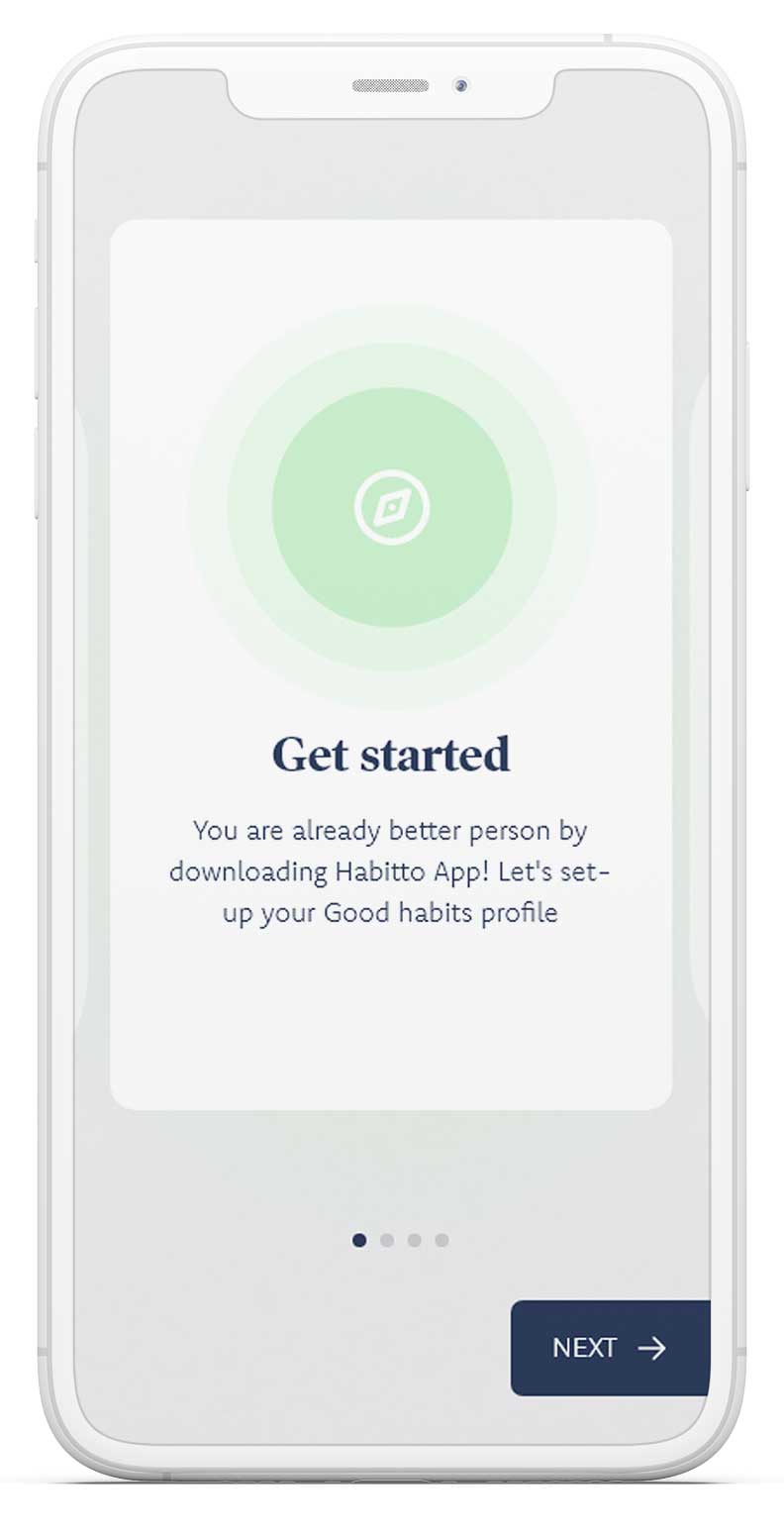 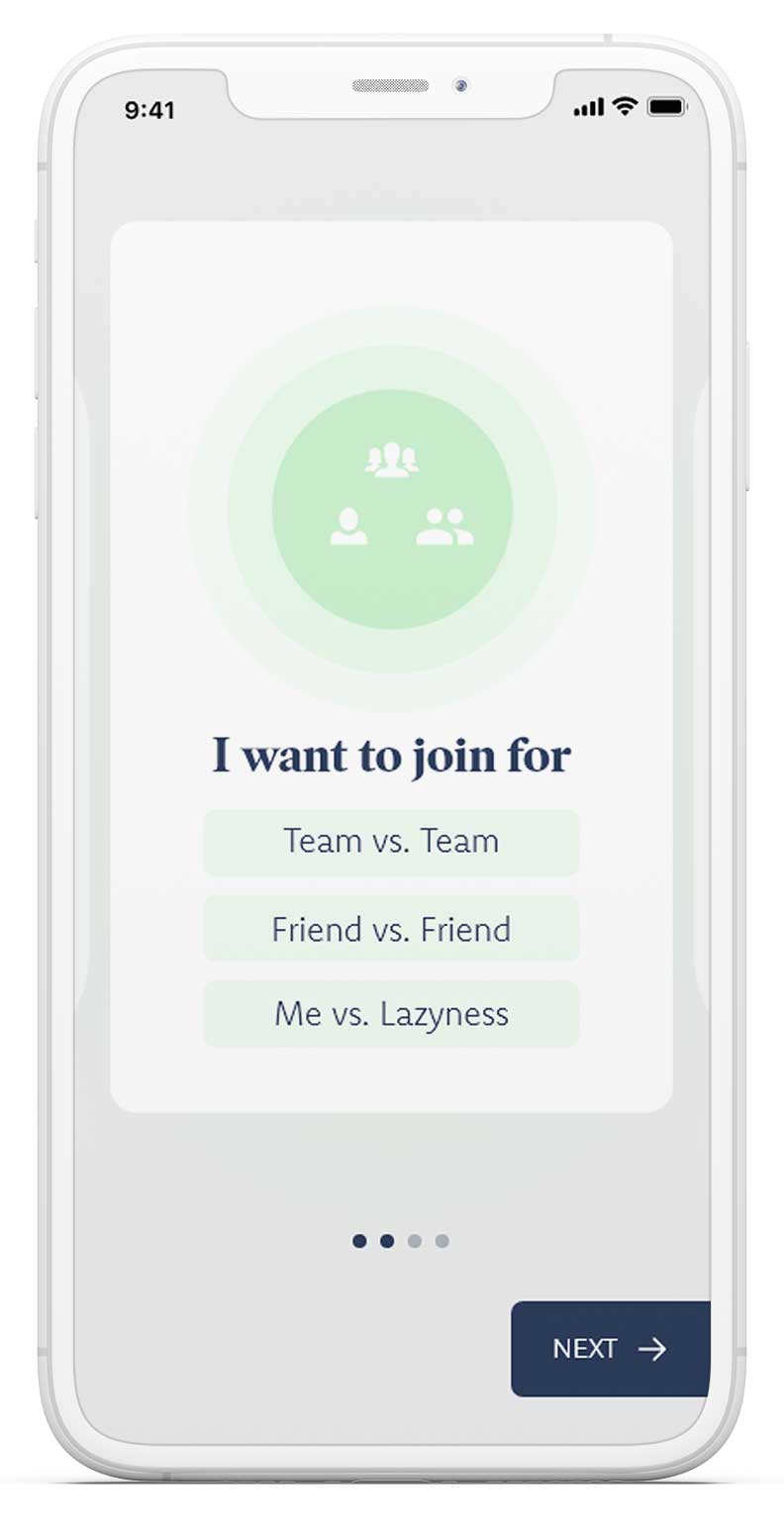 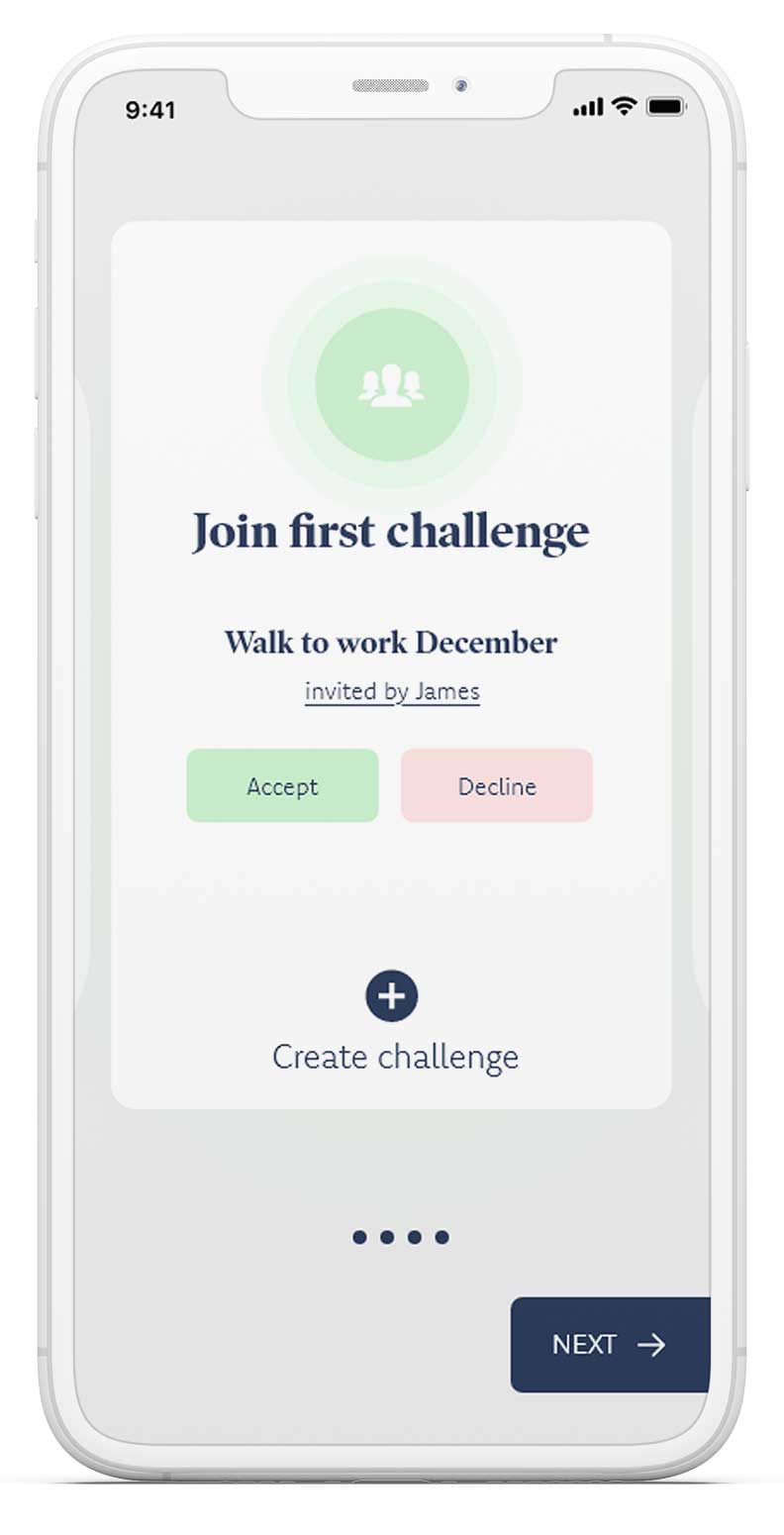 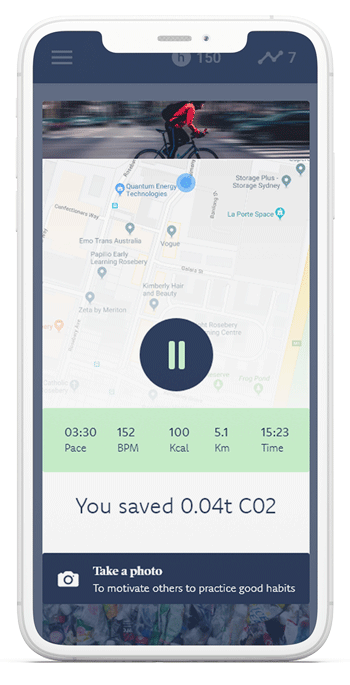 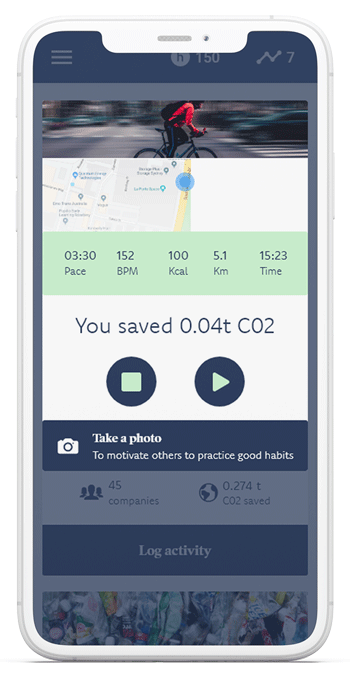 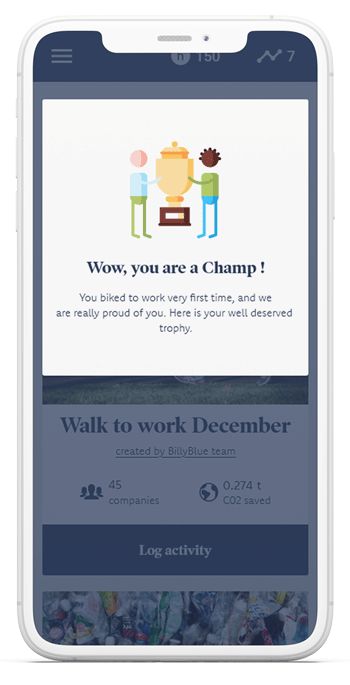 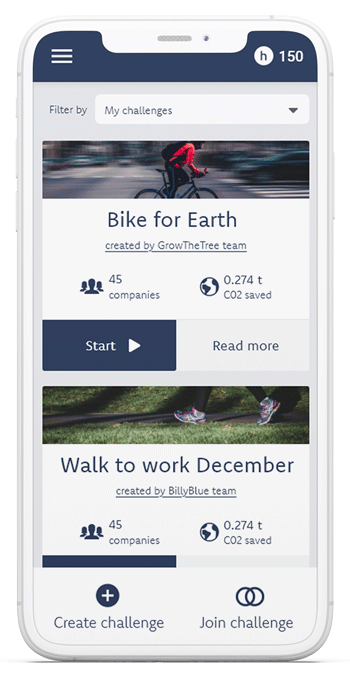 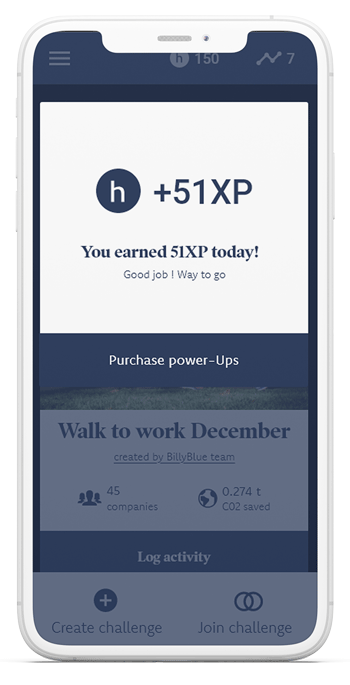 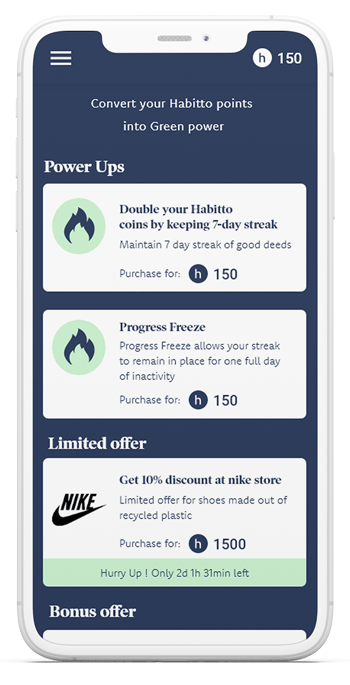